“Authentic.” What does that word even mean? Part of the reason we travel is to have an “authentic” experience. We want to see what the “real” locals look like. What is “authentic” daily life for the people in the countries we’re visiting?

All too often, this quest for the “authentic” is framed through centuries of backward (and often racist) stereotypes. We Westerners travel to exotic lands, expected to be greeted and delighted by foreign tribal savages, living as if they were a live-action issue of National Geographic. 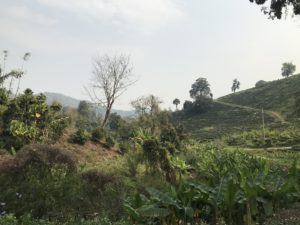 The Dark Side of Tribe Visits

And that desire has led to some real bullshit. Take Northern Thailand, for example. In the city of Chiang Mai the streets of the old town are plastered with ads for “authentic” hill tribe treks. Pictures of women in brightly colored dresses with rings around their long necks sit next to ads for elephant sanctuaries. The touts promise an experience to make our wildest Orientalist fantasies spring to life. And you can even get there on elephant back!

In reality, many of these people are actually refugees from nearby Myanmar. Many of them don’t have citizenship in Thailand, and few, if any, legal rights. They get very little, if any, of the hefty fee you pay to visit them.

In the absolute worst-case scenario, some of these “authentic” hill tribe tours are filled with people who have been trafficked into the country. They are indentured servants, or worse, forced to perform for the tourists. You can read more about some of the ethical issues with hill tribe tours here: https://www.tripsavvy.com/thailands-hill-tribes-1658389.

That’s not to say it’s all bad. There are some that argue that, while it might not be the most “authentic” experience, tourism provides much-needed income for villagers. There are also ethical tour operators out there. It’s just very complicated and it can be difficult to know whether your tour guide is really going to take you to an “authentic” village, or someplace darker.

We avoided the treks in Chiang Mai all together.

Our Hike in Chiang Rai

But, we still wanted to hike through the forested hills of Northern Thailand. After all, that’s what the region’s famous for, isn’t it? We ended up doing our trek in Chiang Rai instead, a few hours away by bus.  We booked a tour with our guest house. They promised an all-day hike, and a visit to some nearby villages.

It was a gamble, I know, but it was really the lack of flashy advertising that sold us. Just a crude hand-drawn map of the route on a wooden board, and some out of focus photos of the sights.

Our tour guide, along with his trusty canine companion, led us up the steep hills, through the bamboo forests in the countryside. It was a pleasant hike, and not too strenuous. We chatted about some of the differences between life in America and life in Thailand. He made a bunch of weird jokes. Nothing too uncomfortable, just weird.

Then we reached the village. Three thatched-roof huts sat on the top of a hill in front of a modern blue house. The inside of one of the huts had a fire pit that actually felt straight out of National Geographic. An elderly woman came and gave us some tea while our guide cooked lunch. She wore a regular shirt and camouflage cargo pants. 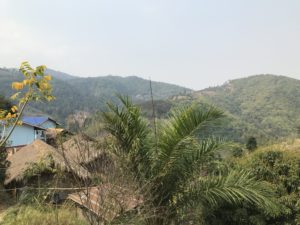 As we waited for our meal to cook, our guide pulled out his cell phone and started playing some music. There were no traditional Thai songs to be heard. No indigenous hymns. We listened to “Barbie Girl” by Aqua. Our guide stood up and started dancing around the hut with the elderly woman in the cargo-pants.

Never in my life would I have expected that I’d ever be sitting in a thatched-roof hut in the hills of Thailand witnessing a “Barbie Girl” dance party. It was surreal, to say the least. It was also probably one of the most authentic travel experiences I’ve ever had. 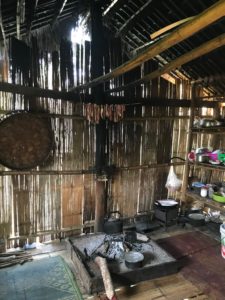 The woman was one of the Shan people, who settled in Thailand after escaping Myanmar following a civil war and independence struggle. She also had seven children. “She’s a professional,” our guide said. While we chatted, the village men in the blue house next door were getting drunk and singing karaoke.

Were We Totally Ethical? I Don’t Know

I’m still not sure how purely “ethical” our trek was. We didn’t give the woman in the cargo pants any money for anything, and I’m not sure how much of a cut the villagers got from the fee we paid for our trek (which wasn’t much.) She was still a refugee, still probably stranded in Thailand with few, if any, legal rights. At the very least, I didn’t get the feeling anyone involved was doing anything against their will.

It’s not an easy issue to navigate.

The rest of our hike took us through tea plantations, past a waterfall and through a couple of other 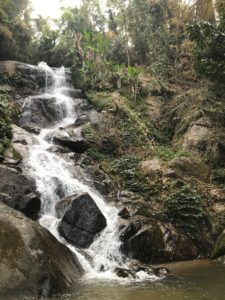 villages as well. The other villages had no thatched huts, just a cluster of modern houses. No traditional costumes, no traditional dances. No one hawking traditional crafts (probably made in a Chinese factory.)

It’s all too common for Westerners to project our vision of “authenticity” on to other cultures. Especially indigenous or tribal cultures. But that vision isn’t necessarily how people really live their lives. It’s better to visit these people and interact with them as they really are, to see them as actual human beings rather than costumes or dances or handicrafts.

Afterall, aren’t we all just Barbie girls, living in a Barbie world?