I’ll be honest, I felt a little bit of anxiety about the whole thing. After all, this was our boss, someone who holds our lives in her hands. But, when your boss tells you you’re going somewhere, you should probably go. Especially when your immigration status depends on you keeping your job. So, we packed our bags, woke up at the crack of dawn and hopped in the car.

What the hell is Chang Xing Island?

It turns out that Chang Xing Island (长兴岛) is a pleasant little strip of land in the Yangtze River estuary. It sits nestled in between northern Shanghai and the larger and more famous Chong Ming Island. As our boss’s husband said: “It is special because there is nothing special here.” 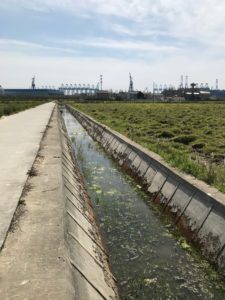 It took about an hour to drive from downtown Shanghai to a cute little hotel in the middle of a charming little agricultural village. Giant industrial cranes towered in the background. Chang Xing Island also has a large shipbuilding facility. This is where China supposedly builds its aircraft carriers. The village reminded me a little bit of Moganshan, just with huge cranes instead of mountains. It dampened the tranquil rural vibe a little bit, but not too much.

We run afoul of our hotel registration

Our boss tried to check us in. It didn’t go well. There was a lot of shouting. It turned out that the hotel didn’t accept foreigners. (This happens sometimes in China, due to police registration regulations, some hotels just don’t have the license they need to accept non-Chinese guests.) They, of course, were happy to keep the room reservation fee.

We weren’t sure what we were going to do. I had to teach an online class at 9:00 AM, and it was rolling into 8:30. Our boss’s husband jumped in his car and drove around the island looking for a hotel that would take us. Most didn’t accept foreigners at all. Some accepted foreigners, but didn’t have any rooms left. Some would accept foreigners, but not Americans. (I believe that’s more to do with the Coronavirus epidemic rather than any anti-American sentiment. Let’s hope it stays that way.) 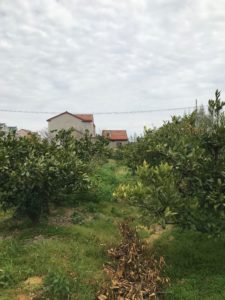 Luckily, the hotel did let me use their lobby to teach my class. The kids were impressed I was in a hotel, but let’s be honest, kids are impressed by a lot of dumb things. A hotel lobby is not the ideal location to shape young minds. A dog kept barking somewhere nearby. People had loud phone conversations on the couch next to me. Everyone who checked in or out took a good five minutes to stare at the goofy American talking English into his laptop.

Eventually, we were at least allowed to use a hotel room, even if we couldn’t stay there. That made the next few classes go much smoother. I finished work and we all settled down to a surprisingly delicious dinner in the hotel restaurant. I know this is probably true everywhere, but I feel it’s especially true in China: food fresh from the countryside just tastes so much better than what you get in the city. Even though we were only an hour away, the vegetables just tasted so much fresher, crisper, cleaner and generally more flavorful.

With happy bellies full of pork, veggies and beer, we drove to the one hotel that said they would accept us. The Vienna Hotel, whose slogan was “Lady-like kind, gentlemanly taste.” It was in a more built-up part of the island, just next to the shipyards and full of colorful lights flashing advertisements for KTV bars. Instead of fresh vegetables, this town was growing high-rises. 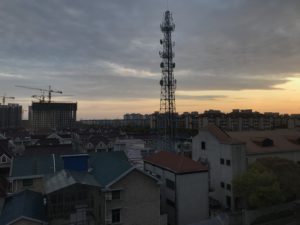 When we walked up to the front desk, the poor woman behind the counter froze. Even though the person working that morning said everything would be okay, they apparently hadn’t communicated that to her. We had to wait while she phoned the manager. A line of disgruntled looking Chinese businessmen with rolling suitcases piled up behind us. Our boss made plans to try and sneak us back into the first hotel if this one didn’t work out. Maybe we could somehow distract the front desk…

Luckily, the Vienna Hotel pulled through. We went to our room that, despite a lingering odor of stale cigarettes, definitely displayed lady-like kind and gentlemanly taste. In the morning we had a great free breakfast and practiced our Chinese making small talk with the cleaning staff in the elevator.

Strawberry fields for a morning 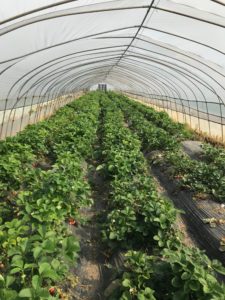 Afterwards, we hopped back in the car and drove to a small strawberry farm. We walked through, picking way more strawberries than we needed. The attendant working there kept piling them into our baskets. We also checked out a local food market in a dusty parking lot. They tried to overcharge our boss when they heard her accent and realized she wasn’t a local, so we left without buying anything. Then we went to the park, which was full of families enjoying their day off. There were picnics, BBQs and pony rides. It seemed like it’d be a nice place for kids, but not particularly interesting otherwise.

Back in the village, there were no oranges, but quite a few orange trees. I saw some ducks.

In all, it ended up being a nice little trip. It was nice to get to know our boss and her husband a bit, and to learn that they’re both genuinely very nice people. It’s always nice to get away from the hustle and bustle of the big city every once and a while, where you can eat fresh food and smell fresh air. 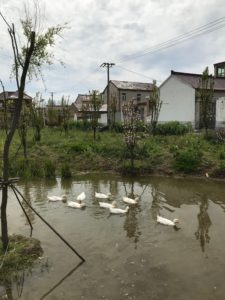 I’ve been learning a lot here in China, but one thing I’m trying hard to learn is how to relax and go with the flow. Sometimes the things that seem like they’re going to be stressful, anxiety-riddled disasters end up being highlights. I look forward to more impromptu mandatory island getaways.