There are many things you could do to celebrate Valentine’s day. You could go on out for a nice meal at a romantic restaurant. You could take a long sunset walk and hold hands, then sip champagne by a lake or river. Or you could go to Bangkok’s monitor lizard park. 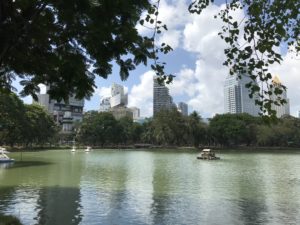 We’d been in Thailand for about a month at that point and only had one more day before we had to go back to China. The extra vacation was great, but stress about the coronavirus put a bit of a damper on the trip. We thought we’d go out with a bang and try to hunt down some monitor lizards.

We’d read that Thailand has a lot of monitor lizards. We hadn’t seen any in the whole month we’d been there, except for a brief glimpse caught on the way to the bus station. It was cool to see that little glimpse, but it wasn’t enough.

Also, they’re smart. This guy posted a video where he actually trains his lizards! They have also been observed working together to hunt, as well as being able to count up to six. They’re pretty cool animals to have even just read about, and they are also very cool to see in real life.

I don’t think they put this in the brochures, but Lumphini Park is the place to see these beasts. The government has actually had to remove many of the lizards from the park since they’re so overrun.  We went there with high hopes.

Lumphini Park is in central Bangkok and was pretty easy to get to on the metro. Just a short walk from the Lumphini station on the blue line. The sun was shining and birds were chirping. We stopped at a convenience store to get some snacks (for ourselves, not for the lizards.)

We walked into the park and started looking for lizards. There was a bike path, with couples out cycling together. Children played in an open grassy area. There was an outdoor exercise area with musclebound bros getting their pump on. There were no lizards.

We sat by the little lake in the middle of the park and ate our snacks. Even if we didn’t see any lizards, we thought, at least it was a nice day out. Suddenly, I noticed a large lump next to the water. I stood up and tiptoed closer. A giant monitor lizard lay sunning itself on the concrete. 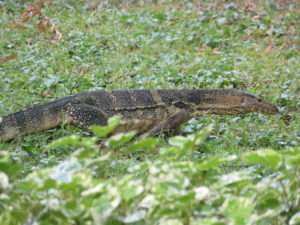 Then we started seeing them everywhere. Lizards under trees, looking at the birds. Lizards walking through the grass. Lizards jumping in the lake, swimming with their tails. Most were probably around three or four feet in length. One big one looked like it was pushing five or six feet long from head to tail.

The monitor lizards look like some sort of primeval dragons, wandering around in a park in the middle of a modern city. Surprisingly, they were also quite beautiful. Each had different patterns. Some were striped, some speckled. Some were green, some were brown, some were black. They all seemed pretty used to people, too. Although, I still didn’t want to get too close. 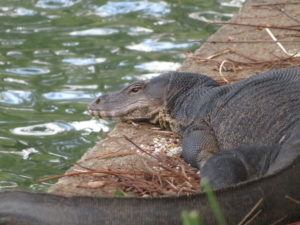 As we were leaving, we heard a commotion from under a tree. A  murder of crows was gathered, squawking and cawing. Amid the crows, a big monitor lizard stood with a dead fish dangling from its jaws.

The crows were bold. They ran right up and stole beak-fulls of fish right out of the lizard’s mouth. Every time the lizard would drop the fish to snap at the crows, others would sneak around and try to take it. They even jumped on its back.

The poor lizard couldn’t find any peace. It waddled away, but the crows kept after it. Then, some lady threw a bunch of water on both the crows and the lizard when they wandered too close to her picnic. The epic drama of nature.

We didn’t stick around to see who ended up getting the fish. I hope the poor lizard found somewhere it could eat away from the crows. It was time for lunch for us as well and time to get out of the heat of the tropical sun.

Our morning in Lumphini Park ended up being one of the best Valentine’s Days in a while. Bangkok’s monitor lizard park is truly a romantic place where you and your significant other can hold hands and bond over giant lizards. 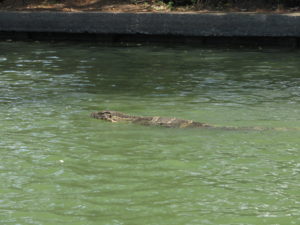